What to visit in Egypt Tours 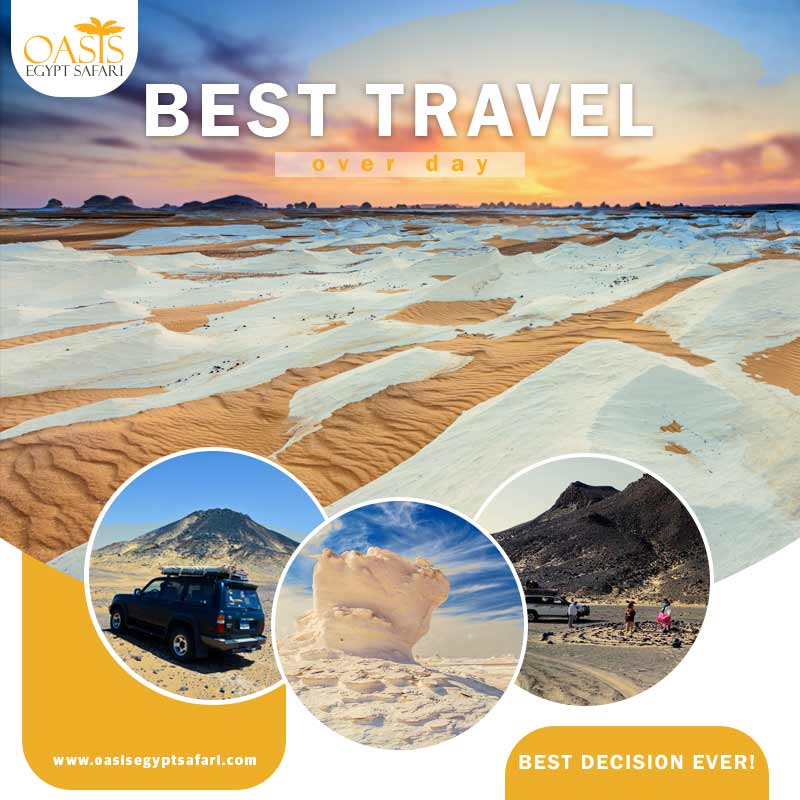 Most tourists to Egypt have a long checklist of sights they want to see Egypt Tours as White Desert Egypt, The Great Pyramid of Giza, the Sphinx,

where you will be able to explore rather and live Adventure and relaxing.

This trip designed for those who like Adventure to set in the center of Desert Egypt.

with us Company Oasis Egypt Safari you will reconnoiter The magic of nature.

where you will be able to relax in the paradise of Safari Desert Egypt at night where A sky full of stars and music,

located stretches over 300 sq.km west of the Farafra Oasis between the Nile Delta Valley and the Libyan border.

safaris with Oasis Egypt Safari is rightly stunning because we have a lot of discoveries.

The White desert Arriving there is like a stepping instance, a different planet When you are in the desert.

you are entirely disconnected from everything that shatters the quiet of your life today, safari with Oasis Egypt Safari is rightly different.

The desert has a white, cream color rather and in the shapes of volcanoes, black colored. a natural museum of chalk rock sculptures.

an inspiring natural sanctuary far from the hubbub.

we will have our lunch in the cold spring. after that, we going to Crystal mountain it’s This is good appropriateness.

while start Egypt tours by the first stop in crystal mountain after seeing the crystal stone.

and the beautiful aria going to see one of the best places in the national park (al agbat ).first established as a protected area in 2002.

Enjoy trip See the sunrise and take breakfast rather and going to see chicken rather and mushroom rook then going to the hot spring, then, back to Bahariya oasis and Cairo.

Will you enjoy life-changing experiences Therefore, you will do so with the bestead value for your money. now Explore the good and new Life.

just let your fiction go, as wild as it can and go to safaris with the Oasis Egypt Safari.

Oasis Egypt Safari one of the top in Egypt companies will take you to another world for you reconnoiter the various amazing sites certainly Egypt and desert Egypt.

TRIP OVERVIEW AT  TEMPLES AND MONASTERIES IN WESTERN DESERT:-

a mudbrick structure measuring about 30m by 20m In the western desert.

In Roman at the western desert, a small protector of troops would have guarded the fortress.

What is a palace Qasr Dush

Surrounding the hill of Qasr Dush is the site of the ancient town of lysis, one of the oldest Roman ruins in Kharga Oasis.

by French archaeologists of the IFAO who have found evidence of temporary occupation possibly dating back as early as the Old Kingdom (possibly Dynasty IV).

Abutting the Roman fortress on the eastern side is the residue of a sandstone temple, enlarged by Trajan.

A monumental stone gateway fronts the temple in the western desert and contains a dedicatory inscription.

In the way, by Trajan dated AD 116, graffiti by Caillaud and other nineteenth-century travelers.

To the north is a large forecourt containing five columns with its northern end.

The main part of the temple measures approximately 7.5m by 15.5m and contains a pillared hall with four slender columns.

This is the best in the western desert, staircase to the roof, and offering table in an outer chamber and an inner sanctuary with a vaulted roof.

March 1989 at the western desert, French archaeologists discovered a majestic collecting from artifacts, now known as the Qasr Dush

Get all- everything inclusive safaris to Egypt Safari

Any questions related to What to visit in Egypt Tours?