The Desert Of Egypt | Adventure in The Western Desert 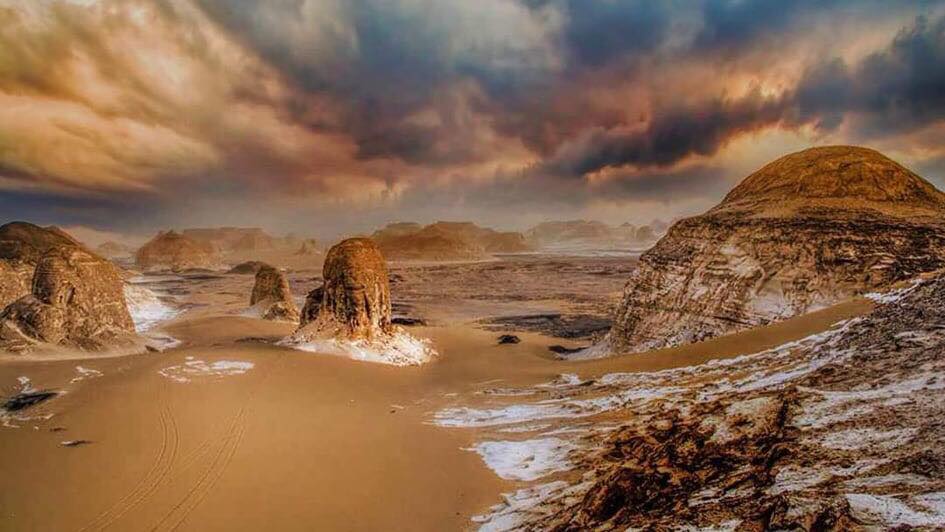 Know with us in Oasis Egypt safari On the Western Desert Which covers about 700,000 square kilometers and value for about two-thirds of Egypt’s earth area.

It spans from the Mediterranean Sea south to the Sudanese border and from the Nile Riverdenewest to Libya infringe. there are seven important clips within this area these she oases Siwa, El Faiyum,

Bahariya, Farafra, Dakhla, Kharga. You will feel the adventure with us in Oasis Egypt safari.

The Western Desert is split between unlike governorates; in the north and west, Get to know me that on Oasis Egypt safari.

The Matrouh Governorate runs the area from the Mediterranean south and the New Valley Governorate from there to the Sudan border, while in the eastern parts of the Western Desert lies in the Giza,

Examples of some oases of the Western Desert:

Know with us in Oasis Egypt safari on Siwa Oasis the most important and most famous oasis in the Western Desert.

Siwa Oasis is one of Egypt’s most outlying settlements. It is located 560 km from Cairo. the citizens of Siwa speak a distinct language.

farming is the main activity of modern. Handicrafts like basketry are also of regional importance. Tourism has in recent decades become a vital source of income. Live the adventure with Oasis Egypt safari

Considered as Bahariya Oasis the From all six oases located closer to Cairo, Egypt’s capital is a wonderful goal. The black hills made up of dolomite and quartzite surrounding the oases make the view stunning.

The view of the hills is robustly stunning. Nothing will amaze you more than the thermal spring found at the Oases perceived to bear restorative and medicinal characteristics by the locals. Know with us in Oasis Egypt safari

The mountains eroded, covering the desert with a layer of black powder and rocks, giving the place its name. And at the edge of the black desert, there are black volcanic hills that erupted in past ages and produced a volcanic substance called jasper, which is the material from which the black rocks are formed.

Climb up the English mountain, which is the highest peak in the Black Desert, and you will enjoy an enchanting view of this strange landscape. Live with us the adventure in Oasis Egypt safari

Know with us in oasis Egypt safari on Features The Black desert is characterized by isolated hills, which are the most important features of the landscape, which distinguish the Bahariya depression from other desert depressions.

The hills are scattered like an archipelago of islands forming what is known as the Black Desert, and these hills vary in their sizes, formations, heights, and shapes, some of them are dark in color consisting of Deloitte and “iron quartzite”.

And some of them are reddish in color as the surface rocks are made of iron sandstone, and as for a few of these hills, they are made of white limestone.

On the outskirts of the Black desert, there are black volcanic and glowing hills, which cast special magic on the area at sunrise and sunset,

but on lunar nights, and when the full moon is completed, that desert appears as an oil painting of an environmental resort in the clouds, and at its end are black volcanic hills that chronicle the date of the eruption of volcanic materials,

Dark in color is called “Dolerite”, which is the “Jurassic” period, which dates back 180 million years, and this is due to the formation of black rocks.

The “Al-Marsous” mountain is the most famous mountain in the Black desert. It is a volcanic crater completely covered with volcanic jasper material, which is distributed beautifully on the mountain as if it draws the wrinkles of time on its face and gains the dignity and prestige of history,

The “Panorama Mountain” is used by Visitors to the Black Desert to climb to take panoramic images of the Black Desert from the highest point, and from here it was called Mount Panorama. Live with us the adventure in Oasis Egypt safari

“Mount of the English”,

As for the “Mount of the English”, it is the most famous of all and is considered a historical tourist destination, to which tourists go to visit the remains of ruins dating back to the First World War.

At its summit, they could discover any infiltration of the enemy forces’ personnel, and this is what made Captain Wilms of the English army order the construction of a building consisting of three rooms and a bathroom with the aim of monitoring the Libyan Senussi forces that were attacking the oasis at that time

Kharga Oasis Of all the six oases mentioned, Kharga is the largest of them all. Enjoy the adventure with the Oasis Egypt safari.

Its size makes it a conducive place to carry out the perfect desert safari (expedition).

The acacia trees and other remnant species like the “jujube” growth and “buffalo thorn” that inhabit the area offer sufficient shade as you relax in the warm weather. Pottery is done by the inhabitants as an art.

Know with us in oasis Egypt safari on Dakhla Oasis. Located in the western part of Egypt, the Dakhla oasis harbors the largest sand dunes in the region.

The oasis is located at the center of the most important trading route in all of Egypt’s history.

This is the only place you will find more than 50% of the land being cultivated hence an awesome opportunity to taste the fresh watermelons from Egyptian soil.

Such a wonderful and relaxing atmosphere created by warm waters will present you a once in a lifetime experience as you traverse the Egyptian landscape in Oasis Egypt safari.

Know with us in Oasis Egypt safari on Farafra Oasis. or the land of cows as known by the ancient Egyptians, and they called it this title because of the large number of pastures and their cows.

The White Desert This strange phenomenon is among the deserts of the whole world, which is located in the Bahariya oasis in the north of the Farafra Oasis in the New Valley Governorate in Egypt, and its area is more than 3000 square kilometers.

In the world, as it is considered a marvel because of its unique phenomena and formations, so come with me to get to know them in oasis Egypt safari.

It is called the White Desert because it is the opposite of all deserts, so all deserts are covered in yellow and brown colors and she alone wears a bright white robe that envelops almost all of its parts.

and it’s towering white makes you feel that you have fallen into a sea of pure milk, so it is considered one of the tourist marvels. All this and more, you will find and live the adventure in the Oasis Egypt safari.

Those who are reluctant to the White desert say that it is one of the most amazing places to camp and do safari trips, and when you sleep there, you feel at night in a different way while you are under the stars as if you are under a planetarium of the shape of the sky and its splendor with its reflection on the white ground.

We are in a company Oasis Egypt Safari We have a large number of safari trips, For information about the trips to White Desert Egypt And others. Click here

Any questions related to The Desert Of Egypt | Adventure in The Western Desert?