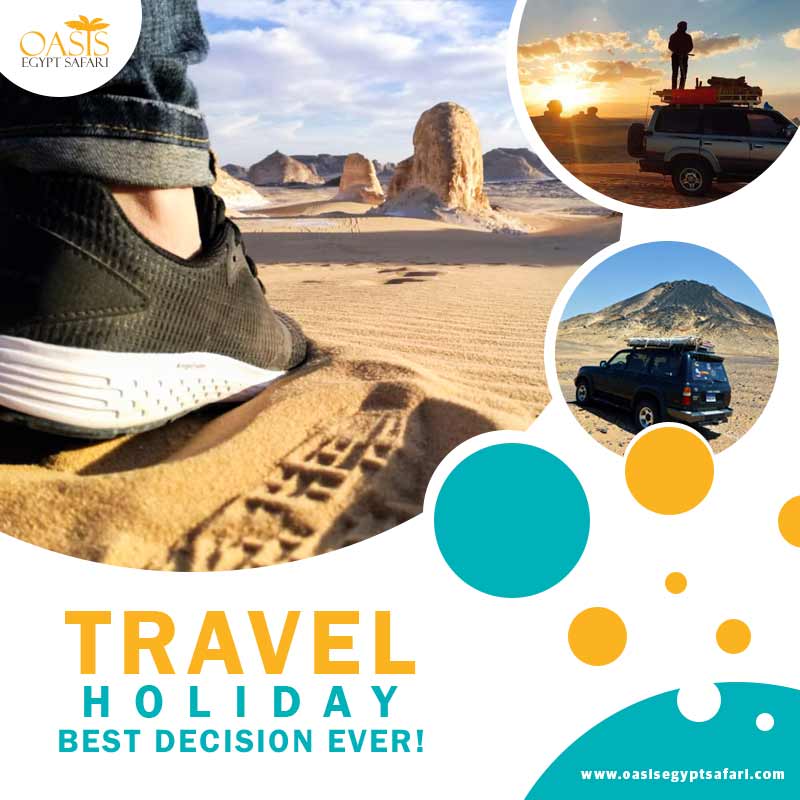 The Bahariya oasis Egypt Has consists of many villages like villages of (Mandishah) as well as el-Zabuabout Located ten kilometers.

As well, of which El Bawiti is the largest and the managerial center.

The Bahariya consists of many villages like Harrah, the easternmost village, is a few kilometers east of Mandishah and el-Zabu. and finally, El Hayz called is and located in the southernmost village.

The village Harrah, however, may not always be considered as part of Bahariya for it is so far from the rest of the villages and about 50 kilometers, south of El Bawiti.

traditional music is very paramount to the people of the oasis, Flutes, drums, and the simsimeyya (a harp-like instrument) are played at social gatherings.

As well, traditional music is very important to Waḥātī people, particularly at weddings. Not only but also, Traditional songs sung in rural styles are passed down from generation to generation.

Oasis Egypt Safari. Moving from Bahariya Oasis Egypt to visit the museum where you can see a lot of golden mummies – banauti tomb[the king of the oasis previously ]

English house: The place where the English ruler was living during, The colonization. And enjoy swimming in the hot spring then we will return to the hotel to have dinner

Moving after breakfast to the black desert – Bedouin village [El haez ] hot spring –crystal mountain having lunch in crystal mountain –then going to El Agabat dinner and sleep in agabat.


Moving after breakfast the big and small valley and have lunch in Magic spring after and finally, lunch.

Then we will move to see some stones which formed from the effect of the wind like [mushroom – horse – chicken –ice cream ]returning to Bahariya then to Cairo.

With us Oasis Egypt safari makes visit the pyramids as well as Safari to Egypt Western Desert, Bahariya oasis Egypt is one of the more fetching of the desert circuit oasis, to see the sand dunes furthermore the black desert.

Oasis safari Egypt, enjoy your trip, Environmental Therapy & Healing Climatotherapy as well as vision ancient Egyptian and Grace-Roman sites Which are unequaled ever.

Visit ancient Egyptian this was the bestead choice Bahariya Oasis Egypt is a must home to amazing ruins as well as the Temple of Alexander the Great, beautifully painted Ptolemaic tombs, very old churches.

The recent discovery of the golden mummies, in addition, to the pride of the Bawiti Museum today.

turned the oasis’ main town, into a tourist magnet to get a bird’s eye view from Bahariya oasis Egypt.

Has won Bahariya a high rank on the tourist map of Egypt, Because of its proximity to the Black Desert.

Go for a short with Oasis safari Egypt for a hike up to the mountains.

For an aerial view of the oasis, dunes in addition to the great sunsets is a lush haven set in the midst of an unforgiving desert and surrounded by black hills made of quartz

Safari trips and offers may interest you: